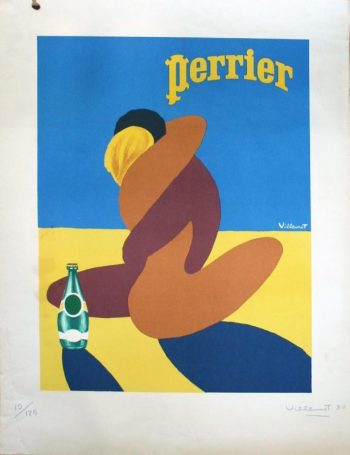 Bernard Villemot (1911-1989) A rare signed limited edition print 'Perrier', dated lithographic print on paper, signed Villemot 80, edition number 10/125 in pencil to lower margin, featuring stylised couple in an embrace This is a rare limited edition printed and signed version of this image, rather than the standard poster. Bernard Villemot (1911-1989) was an enormously influential French 20th century graphic designer. His work and style are instantly recognisable, particularly his poster designs created for Perrier, Bally, Orangina and SNCF (French Rail service). For more information on Villemot and his work see: 'Embracing An Icon: The Posters Of Bernard Villemot' by George & Jeanne Bon Salle, 2015 Condition report: This print displays well although does have several condition issues, coffee has been spilled to a small area of the top, which is visible on the artwork as well as some minor related staining to artwork. Additionally there are a large amount of handling creases particularly to left lower edge and some minor tearing to the edges.

Stephanie Connell Art & Antiques specialise in decorative objects and ephemera from the 19th and 20th centuries. We focus on pieces which encapsulate the era in which they were created or which represent the design style of the period. With over 15 years experience in the art and antiques industry and as a specialist in historic and entertainment memorabilia our collection offers stylish and iconic pieces at affordable prices.