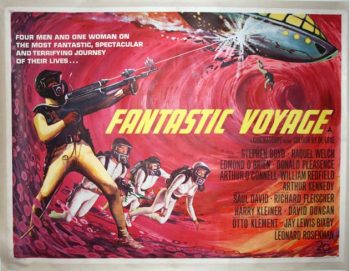 An Original British Movie Poster for 'Fantastic Voyage', 1968
Circa 1968

An original British quad film poster for 'Fantastic Voyage', 1968, featuring artwork designed by illustrator Tom Beauvais, conservation linen-backed, dimensions 30 x 40 inches (762x1016mm) Released by 20th Century Fox 'Fantastic Voyage' features Raquel Welch in an early cinematic role, as Cora. The film also features Donald Pleasance and Stephen Boyd in this tale of a miniaturised submarine injected into the body of a diplomat. This poster has a quintessentially late 1960s design capturing the sci-fi theme. Further condition information: Professionally linen-backed with minor restoration. Poster originally folded (typical when sending to cinemas), colours good. The poster had been shaded with red ink to cover surface loss to centre left artwork. This has been professionally removed and restored but is visible on the reverse of the linen caused during the linen drying process. Minor paper loss to top left corner, minor surface loss to falling figure. Some minor tears to white border and where folds meet. Original studio release stamp to reverse, no longer visible due to linen-backing.

Stephanie Connell Art & Antiques specialise in decorative objects and ephemera from the 19th and 20th centuries. We focus on pieces which encapsulate the era in which they were created or which represent the design style of the period. With over 15 years experience in the art and antiques industry and as a specialist in historic and entertainment memorabilia our collection offers stylish and iconic pieces at affordable prices.