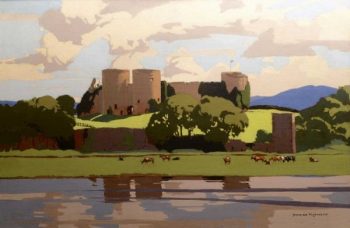 Sir Norman Wilkinson was a successful marine painter and illustrator. He was also responsible for developing the concept of “dazzle camouflage” for British warships during the First World War. But it was as a poster artist that he reached his highest artistic level.

In 1905, Wilkinson was commissioned by the London and North Western Railways to produce a poster advertising their rail/steam link to Ireland. Recognising the opportunity to create a new approach to railway poster design, he depicted the product as just one element of a broader landscape. It was the first time this had been done and its revolutionary concept was an important influence in the development of the pictorial poster.

He went on to organise the celebrated commissioning of poster designs from members of the Royal Academy for the London Midland and Scottish Railway company in the 1920s. Wilkinson believed that art should play an important part in advertising. His posters were well-planned and executed in broad tones of colour with a skilful use of black to strengthen the design. He was, in his words, “the father and mother of the artistic poster on English railway stations”

Rhuddlan Castle is a castle located in Rhuddlan, Denbighshire, Wales. It was erected by Edward I in 1277 following the First Welsh War. A popular tourist destination, it was ideal to use as a lure for people to travel to for their holidays.

Wilkinson brings into the painting simplicity of the forms and the use of regular shapes, which clearly defined by light recalls paintings by the Renaissance artists. Using broad areas of colour the work depicts an overall pictorial coherence and makes sense in terms of paint of the light and movement in the landscape. The public were amazed on seeing these new works as Wilkinson was breaking new ground in his style of painting.

The light breaks across the field in front of the castle, almost highlighting its importance in the landscape. Brilliantly atmospheric, the large clouds and reflections in the water set up a tension between the illusion of space and depth. Adding the cattle to the painting helps to give a sense of scale to the landscape and dashes of colour.

Darnley Fine Art holds an extensive stock of fine paintings from the 16th to the 20th Century. We are a leading specialist in 19th Century Orientalist paintings of the Middle East and prints by David Roberts. We also try to have a good selection of Portraits and are one of the only galleries that deals in original paintings for Railway Poster’s from the 1930′s.

We have an extensive knowledge in these fields and advise clients on starting or adding to their collection, providing a detailed background to each artist’s work. Advice is also given on other important aspects of acquisition such as framing, hanging, insurance and the maintenance of works of art.

The works we offer are the finest available and competitively priced to ensure that our clients will always return to Darnley Fine Art for superb choice and quality when buying art. The gallery is placed in the heart of Chelsea. The website reflects a selection of the paintings we have available at any one time.

We have sold works to museums and public institutions around the world.

Darnley Fine Art are members of BADA, LAPADA and CINOA.