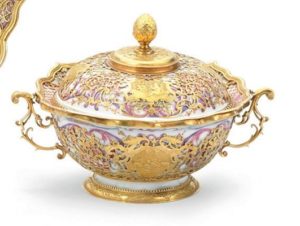 Made by the Du Paquier porcelain factory and court goldsmiths sometime between 1735-40, it was thought to have been a gift from Charles VI to one of his daughters – probably the future empress Maria Theresia – and was installed in the imperial chapel in the Hofburg in Vienna as a holy water stoop.

By the early 19th century it was in the collection of a European noble family and remained there until 1935, when it was acquired by the Swiss collector Dr Albert Kocher (1872-1941), whose assemblage of 18th century porcelain (much of it now in the Historisches Museum, Bern) was among the finest in pre-war Europe. It came by descent to the vendor from a European nobleman.

Only a handful of similar gold-mounted pieces has survived – others in major museums – with most, if not all, thought to have been familial or diplomatic gifts from the emperor.

In the factory history Fired by Passion: Vienna Baroque Porcelain of Claudius Innocentius Du Pacquier (2009), Meredith Chilton describes them as “the ultimate expression of the value that was placed on porcelain as a rare material of great desirability”.

Bonhams director of European ceramics, Sebastian Kuhn, said the sale represented “what is likely to be the last opportunity to acquire a piece of this importance at auction”.